Mugs and cups are cool.
Plates are great.
But a bowl greatly satisfies me. 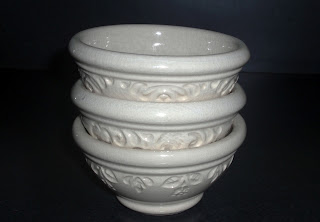 These cream-colored bowls are made by a local craftswoman.  Unfortunately, she "retired" from the business several years ago.  I have several other bowls in my collection.  I can't decide which ones I love best. 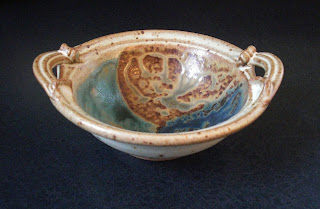 This sweet little bowl is from Fitzgerald Pottery. Each year during the Central Pennsylvania Festival of the Arts I beat a path through the throngs of slow-moving tent gazers to get to their shelves while they are fully stocked. Love these colors. 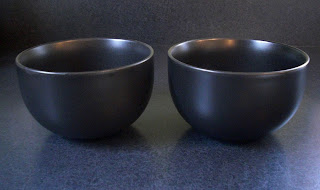 Our everything bowls from Target.  These things take a beating.  I love my black dishware and my black countertops.  Get granite countertops they all said.  Way too expensive I said.  We settled for laminate -- still going strong 14 years later.
Casseroles
Cookie dough
Veggies from the garden (probably someone else's)
Yarn
Soup
A bowl is for everything.  A bowl holds comfort.
Posted by Kim Hambric at 9:56 AM 4 comments:

A Line a Day 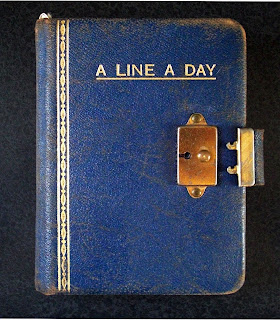 She was not happy that I took it.  However, it was necessary.

After her mother died, I found my grandmother's diary in my mother's basement along with a few other belongings.  I decided to have a bit of a read.  In those 5 minutes, I discovered more about my grandmother's life than I had known over the course of 30+ years.  I won't divulge the family secrets or set the skeletons out by the curb, but my grandmother's trials of overcoming a not-so-perfect past touched me.  I wanted to know more.

I mentioned to my mother that I found her mother's diary and I was quite interested in it.  I should have taken it with me that very day.  I did not.

Upon my next visit home, I searched for the diary again.  After a weekend of no luck, I asked my mother what happened to the diary.  She told me she had thrown it in the trash.

My mother is quite well known for throwing things in the trash.  Every few years, we had to purchase another set of cutlery, as with every few meals, she would toss a fork, knife or spoon into the trash.  Accidentally, of course.  If I did not clean my room as a child, she would head in with a trash bag while I was in school and eliminate what she thought I no longer needed.

So, when her diary presented itself, it went into my luggage immediately.

I informed her what I had done.

Then I proceeded to make a few pieces of art with some of the entries.


She never did see the few pieces I made from her entries.  I did tell her no family secrets were revealed.

My mother was a prolific knitter and seamstress.  She made most of her clothing as a young married woman.  I recall Easter was not Easter without a new dress sewn by her.  As my mother was not much interested in cooking, the household appliance I most associate her is the iron.    A symbol of the seamstress and a symbol of the life of a housewife.

However, I still have the urge to take something when I see it and not take the risk of it being thrown away.
Posted by Kim Hambric at 11:38 AM 1 comment:

Email ThisBlogThis!Share to TwitterShare to FacebookShare to Pinterest
Labels: Family 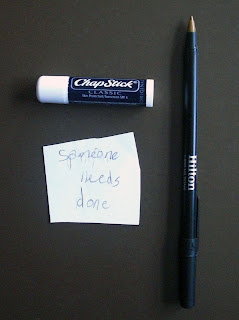 Next to the computer in the office.  Only slightly rearranged.  I still LOVE the dark, dark, dark brown shelving and desk I have in my office.  Most people thought I was crazy to make the whole room this color.  I wasn't.

Hilton pen -- yes we get Hilton points.  Ever had a free three-night stay in the middle of New York City?  I have.  Love those points.

Chapstik.  One in every room.  I should have bought stock in this company.  I guess it is a petroleum product, however, and I should be ashamed.  Yet it is the only thing that does NOT cause my lips to swell to epic proportions.

Someone needs done.   I'm guessing this is an old note written by my daughter that has slipped out from somewhere.  Apparently a lesson in Central Pennsylvania Speak.  Here, we don't say, "The dishes need to be washed."  We say, "The dishes need washed."  But who the heck cares, I'm always the one washing them.
Posted by Kim Hambric at 6:30 AM 2 comments:

Email ThisBlogThis!Share to TwitterShare to FacebookShare to Pinterest
Labels: office 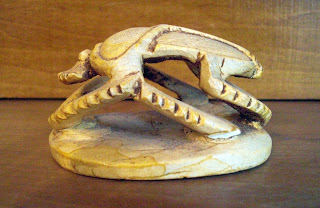 My father-in-law passed away last Tuesday after a long bout with lung cancer.  Much of his life was spent traveling.  The rewards for those who tagged along or waited at home are beautiful souvenirs.  We already had a row of these little guys displayed in our dining room. 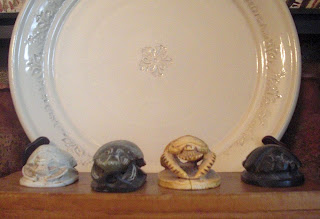 While going through his closet a few days ago, we found several more of these scarabs and figures from Egypt and the middle east.  Each one has its own character.  We have added a few more to our home.  We did not bring home the remains of the mortar shell that went through his bed during the civil war in Beirut.  His plan was to make a lamp out of it.  Not sure he was serious.  Likely he was having his last cigarette of the night and wasn't in bed reading.  If that is the case, then I guess we can say that cigarettes saved him that night.
Posted by Kim Hambric at 7:13 AM No comments: 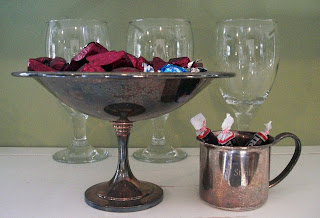 If I were to ever start a business, chocolate would have to be involved.  Yes!  I could be a chocolatier.  One for me.  One for you.

No, these are not gourmet chocolates in this photo.  I've already eaten those.  These are the backup team.

I do love silver vessels, although I hate to polish them.  I'm sure the piece on the left was a very inexpensive Ebay purchase.  The cup on the right is my husband's baby cup.  I'm sure he never used it as a child, so I'm putting it to good use now.

This is a photo of my kitchen shelves.  I'm hoping that the dust and peeling paint are not TOO obvious.  We like that lived-in look.
Posted by Kim Hambric at 6:15 AM 2 comments:

Even the Butter has a Home 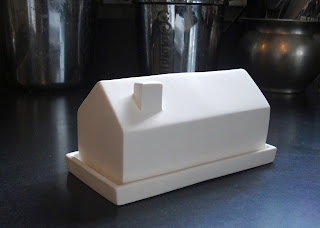 So, my goal for the year to not buy things I don't need has been spoiled already.

The old dish was a hand-me-down that we have owned for 20+ years.  It is chipped, stained and deglazed in places.  It rests in the garbage as I type.  It was ceremoniously replaced with this happy piece from West Elm.  The butter would still be residing in its old, decaying dish if West Elm had not offered free shipping.

I've read the Paula Deen fat flak these last few weeks.  If Paula goes down, I sure hope she doesn't take butter down with her.  Butter is very important in my family.  We'd keep it on a pedestal, as long as the pedestal would fit in the fridge (it would not).  I remember the butter of my youth.  A usual breakfast at my grandparent's house would consist of eggs, bacon, biscuits and a big ol' round of butter on a plate.  No margarine there!  Frankly there's no better smell than butter melting in a frying pan.
Posted by Kim Hambric at 6:35 AM 4 comments:

I love to flip through those glossy coffee table decorating books.  Lately, I've noticed how large those perfectly decorated houses have grown.  9,000 square feet!  Who needs that?  I am always drawn to the tiniest rooms, the nooks and crannies.


I love these tiny house sculptures by Lauren Gray from The Haunted Hollow Tree on Etsy. These are sitting on some of my grandmother's vintage cookbooks. No doubt, a great deal of the recipes call for lard. Part of my husband's cookbook collection resides on this shelf. The newest is Saraban, a cook's journey through Iran. My husband spent some of his boyhood there and the food of the area is lodged in his memory forever. Two dishes have been made from this book, both good. One required few ingredients and relatively little time. One, a rice and lamb concoction, took two days to make. The family determined that, while good, it would be a one time deal because of the time required.
Posted by Kim Hambric at 9:18 AM 2 comments: 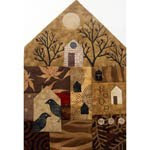 This blog is to show myself what I already have. I live in a smallish house built in 1937 with my husband, daughter, dog, cat, and hundreds upon hundreds of dust bunnies.